I should have a big package coming in the mail from HobbyKing in Hong Kong today. I'm going to blog as much as possible about the construction, testing, and flight of my creation. Stay tuned for more details soon.
Posted by Gadgetboy at 9:07 AM No comments:

A complaint to Apple


I purchased a new iPhone 5 on the day the product was launched, and then waited patiently for the Lightning-to-30 pin dock connector adapter cables to become available. I own a 2008 Infiniti G35, which features iPod interoperability through an Apple 30-pin dock connector. I have used this connector successfully with every model of iPhone, as well as my 5th-Generation iPod. I ordered but didn't receive a lightning-to-30 pin dock adapter until 2 days ago, which is well beyond the 14-day refund period imposed on my iPhone purchase. My car audio system doesn't recognize that the new iPhone is connected when I use this new adapter cable between my iPhone 5 and my automobile's 30-pin dock connector.

If the adapter cables had been available on the same day as the new phones, I wouldn't have even gotten out of the parking lot of my local Apple store before I noticed the problem and I would've returned the phone. I think it's unfortunate that I wasn't able to even verify this important feature until well after the product return period for my phone had passed.

I have Apple Support case number 362497821 open to address this issue, and I've opened a complaint, number 362507803, to address this issue. I'm being told by product support that this is most likely a 'compatibility problem,' and I think this is a most unsatisfactory answer. I do not see this as being my problem, or a problem my automobile manufacturer needs to solve. Nissan followed the specifications published by Apple when designing the car audio system in my car. If Apple wishes to arbitrarily change the connector on their devices to a non-industry-standard connector, they should accomodate the legions of previously-satisfied Apple customers who often sought Apple interoperability as a condition of purchase. (I also imagine somebody on the product design team at Apple owns a car similar to mine. To me, it doesn't seem too unreasonable for somebody in that capacity to actually try the product in their own car before releasing it to production.)

I see two possible solutions to this issue that are well within Apple's ability to execute:
* Apple should manufacture a lightning-to-30 pin dock adapter cable that works with the iPod dock connector signalling protocol that Apple itself designed and my auto manufacturer implemented per Apple's specifications.
* Apple should offer a Bluetooth A2DP device that attaches to the now-legacy 30-pin dock connector in automobiles equipped with this feature. This way, new iPhone users could use their phone's Bluetooth A2DP functionality to connect their iPhone to their car audio system. I mention this option because my car doesn't have a bluetooth A2DP feature built in.

Like many other satisfied iPhone customers, I am enjoying my new phone. I would prefer that Apple provided (or, committed to provide,) a solution to this problem. Failing that, I would appreciate the opportunity to discuss other alternative means to resolve this issue.

Posted by Gadgetboy at 11:30 AM No comments:

I was struck by what was no longer present in the "Tomorrowland" area of Disneyland. The area was originally set up to be a World's Fair-type exhibit of what was coming in the future. Rockets, and home atomic power, picture phones, etc. None of that exists anymore in "Tomorrowland", and I would argue those monuments of innovation are absent from our social landscape as well. True, we've created the computer revolution, and computers changed everything. Yes, I said everything. The folks who were trying to imagine the future 50 years ago couldn't possibly imagine how cheap, small, and increasingly powerful computers would change human communication and learning, medical science, home entertainment, and the conduct of business. In the last 20 or so years our government, and our society has (IMHO) lost the capacity to dream about What Comes Next. You would be forgiven for smirking at the concept of an atomic-powered car as it was originally envisioned 50 years ago, but we have re-thought that problem of cheap, safe, and plentiful sustainable energy sources, and we did so going back 20 years ago, when Fleischman and Pons announced their cold fusion research.. Thankfully, a hanbdful of researchers didn't give up on the prospect of a cheap, safe, sustainable energy source. Who would've thought 20 years ago that we'd be in such dire need of a breakthrough like this 20 years ago, when the scientific community was busy running Fleischman and Pons out of town on a rail?

My point is this... Nobody thought it was crazy to dream of all the wild stuff we used to come up with in these bygone World's Fair "The Land Of Tomorrow" exhibits. Is a concept like cold fusion any more ridiculous?

This video from CBS news explains a current re-evaluation of research which was roundly discredited 20 years ago.
Posted by Gadgetboy at 9:01 AM No comments:

The right notebook computer at the right price 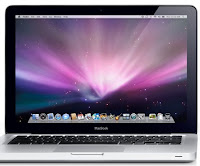 Apple commands a hefty price for their products, but they also give you a good value for your money. I've owned a new macbook since early November last year, and I couldn't be happier with a notebook computer.

By making the laptop enclosure out of a block of solid aluminum, they've built in a level of structural integrity I've not seen in even tbe best ThinkPad, my previous 'gold standard' for laptops.

There's nearly nothing I do that I can't get done natively in MacOS. I also run VMWare Fusion for MacOS, and have a Windows XP VMWare image for those occasions when only Windows will do.
Posted by Gadgetboy at 4:39 PM No comments:

Where have I been lately

I'm afraid I've been swept into the facebook vortex, like so many other people lately. I've been busy re-connecting with all manner of former classmates, co-workers, and other long-lost friends.
Posted by Gadgetboy at 4:32 PM No comments:

I couldn't have said it better

Campbell Brown is taking on executive compensation in her latest CNN posting, a subject I've covered before. Would it be hoping too much to wish this astonishing and insensible trend be somehow reversed in the coming years?
Posted by Gadgetboy at 12:26 PM 1 comment:

The way things are done, down under

I've already talked about gun bans in Austrailia, and now the Australian government is seeking to further encroach on the rights of Australian citizens. Recent news postings are saying there's going to be Internet Filtering down under. As far as I'm concerned, there's plenty of content that ought to be filtered, but the job of filtering that content needs to fall on consumer's shoulders. Oh, and by the way, if China can't stop all the undesirable traffic coming into their country, what makes Australia think they can?
Posted by Gadgetboy at 6:31 PM No comments: Back when WLS-AM in Chicago was better than an iPod